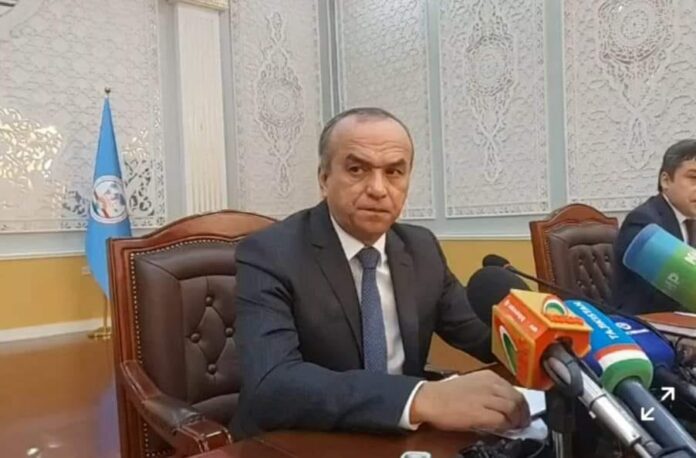 On September 19, 2022, a briefing was held at the Ministry of Foreign Affairs of Tajikistan on the situation on the Kyrgyz-Tajik border.

During the briefing, the Deputy Minister of Foreign Affairs of the Tajikistan Republic, Sodik Imomi made several bald statements.

The Bulak.kg editors analyzed his statements.

1. Quotes: «On September 14, without any reason Kyrgyz side committed an act of aggression against Tajikistan, using all types of armed forces, all types of military equipment.”

“The act of aggression of Kyrgyzstan against Tajikistan was a planned action.”

Investigative journalists of the Kyrgyz Republic found several evidence that Tajikistan was the first to attack Kyrgyzstan:

* During the conflict on the border, the Tajik military invaded and attacked the territory of Kyrgyzstan: they engaged in looting, destroyed houses, and seized civilian objects. Most of the villages in the border areas have been destroyed.

* According to satellite data from the US National Aeronautics and Space Administration (NASA), fires from shell explosions were recorded mainly on the territory of Kyrgyzstan, which also indicates an invasion of Tajikistan in the Kyrgyz Republic.

In addition, it was proved that armed militants with special training under the leadership of General Shokh Iskandarov invaded Kyrgyzstan. Thus, the country violated the fundamental principles of the UN Charter by attacking civilians and destroying civilian objects.

* The Tajik side shelled the Kyrgyz territories using a multiple launch rocket system (MLRS). The surroundings of the Batken airport and objects on the outskirts of the city were subjected to shelling by Tajik MLRS.

Meanwhile, there is no information in open sources confirming that Kyrgyzstan was the first to start hostilities and attacked its neighbors.

2. Quote: “We are rightly reproached for the fact that our media reaction is belated, we do not keep up with the events. In this regard, I want to say that this is an objective process if you are the victim. And the aggressor country not only plans armed actions in advance but also, accompanies them in the media.”

The topic of the invasion of Tajikistan and all related events was top news for several days in both government and corporate media, as well as social networks. Journalists and bloggers daily covered the topics around the armed conflict from the process of collecting humanitarian aid to the course of military operations. Kyrgyz officials held press conferences and briefings, and President Sadyr Japarov published a public appeal on his page. At the same time, information about the events in Tajikistan took place in a completely different direction. Both the official website of the President of Tajikistan and the government media did not cover the events taking place on the border in any way. There were publications in private media, but they were not top news. At the same time, many photos and videos from the scene appeared on social networks and instant messengers. Inappropriate content was indicated in the publications: aggressive propaganda, hate speech, and fake news.

Below are examples of fake news spread by the official authorities of Tajikistan, the media, as well as users of social networks:

* Information that Kyrgyz soldiers destroyed the houses of civilians in Tajikistan was circulated on social networks. However, when checking, it was found that the photos attached to the post were published at different times on other topics.

* Sputnik Tajikistan, citing the Ministry of Internal Affairs, reported a drone attack in the village of Ovchikalacha, Bobojon-Gafurov district. But there is no evidence base for this information.

* Journalists also revealed that the Tajik media used a pseudo-expert to spread disinformation.

* Information was published on the Tajikistan News page on Facebook that the Kyrgyz military is forcing civilians to fight. But when checked, it was proven to be fake.

* Fact-checkers exposed the official statement of the Border Guard Service of the Republic of Tajikistan, which said that the citizens of the Kyrgyz Republic began to set fire to their own houses.

* It has also been proven that Tajik social media users use fake accounts under the names of Kyrgyz people.

* Earlier, the Dar Sarhad telegram channel reported that Tajiks were distributing humanitarian aid. But the footage was received from the state television channel of Kyrgyzstan.

* As evidence of the use of drones by the Kyrgyz military, a video of powerful car explosions was released. But during the investigation, it was found that the video was filmed a week before the start of the border conflict.

* Earlier, Sputnik Tajikistan, citing the head of the Ulema Council, reported that Kyrgyz drones had destroyed the mosque. The same accusations were made several times during the briefing by the Deputy Minister of Foreign Affairs of the Republic of Tatarstan Sodik Imomi. But fact-checkers found the original source of the image, which was used in the media, and found out that the picture was taken back in 2013 in Syria.

3. Quote: “In Bishkek and other large cities of Kyrgyzstan, citizens with Tajik nationality without regards to citizenship are identified, to whom illegal violent actions are applied: they are beaten, taken away in an unknown direction.”

In such a case, this type of information would not go unnoticed by civil society, government agencies, and the media. Crimes, emergencies, and accidents occurring in the country, one way or another, get into the media summary, social networks, and instant messengers.

Moreover, the deputy minister did not give specific facts, did not name the number, names, and other data of the alleged victims, as well as other cities where, according to the official, violent actions take place. He did not indicate the source from which such information was obtained.

It should be noted that during the conflict at the border in May last year, such information was disseminated on Tajik public pages. It was reported that “one Tajik was attacked in a crowd in Bishkek”. The video went viral, however fact checkers then checked and refuted it.

4. Quote: «The acts of aggression on the border are made to ensure that the current government proves its legitimacy in society and uses such aggressive «patriotic» rhetoric used to pretend to be vindicators of the interests of the Kyrgyz people, which they understand very distortedly.»

“This is what an aggressive campaign leads to, creating the image of the enemy in your neighbor.”

Propaganda in the social media networks of the Tajik segment is actively being carried out about the alleged illegitimacy and criminality of the authorities of the Kyrgyz Republic. In all these posts and messages various methods of slandering and demonizing the enemy are used. For visualization, graphic editors such as Photoshop are used. The Deputy Minister of the Republic of Tajikistan in his speech repeatedly reinforces these methods with manipulations, demonizing the authorities of Kyrgyzstan. At the same time, the current authorities of Kyrgyzstan were legitimized through the presidential elections on January 10, 2021, and the parliamentary elections on November 28, 2021.

Verdict: manipulation — demonization of the enemy and repetition.

The demonization of the enemy — turning the opponent into a «subhuman», immoral, ruthless, etc., using false or unverified accusations.

Repetition is the repetition of a certain symbol, slogan, or text for the audience to remember it better.

5. Quote: “In 2015, they (Kyrgyzstan — ed. note) adopted the law “On Border Commissioners”, according to which almost any adult can carry and use weapons.”

Firstly, according to Article 1 of this resolution, the border commissioner is not an adult, but a person of an authorized state body in the field of state border protection. At the same time, there are many requirements, such as military training, qualifications, residence on the territory of the state border, no criminal record, etc., which the authorized state body must comply with.

6. Quote: “In recent years, Kyrgyzstan has been openly pursuing segregation policy towards Tajikistan, despite large statements, including the statements given by the head of a neighboring state, from the rostrum of the UN General Assembly last year, a decision was adopted to ban entry, stay and transit examination of citizens and cargoes of the Republic of Tajikistan on the territory of Kyrgyzstan”.

Clarify that segregation is the forced division of people into racial, ethnic, or other groups.

According to lawyer Semetey Amanbekov, there is not a single law in Kyrgyzstan that would contain elements of segregation. Discrimination on racial, ethnic, and other grounds is prohibited by the Constitution of the Kyrgyz Republic. Legislative acts are aimed at ensuring the national security of the country, combating smuggling, facts of illegal crossing of the state border, and other violations of the law.

In conclusion: the Deputy Minister of Foreign Affairs of the Republic of Tajikistan, Sodik Imomi, lied at least 5 times during the briefing and also used the manipulation of information. The official used such methods as “denigration”, “demonization of the enemy” and “repetition”.

It should be noted that on September 19, the briefing was broadcast live from the official Facebook page of the Ministry of Foreign Affairs of the Republic of Tajikistan. Later, the press service published a post with photos of the briefing and provided a link to the official website.

However, the official website of the Ministry of Foreign Affairs of Tajikistan does not open on the territory of Kyrgyzstan, and on the verified page of the department comments are limited.

«The unprofessional and reckless claims of a diplomat of this level about the domestic policy of a foreign state, including mentioning  of some kind of act of segregation policy, does not correspond to reality and basic norms of diplomatic ethics. Obviously provocative statements, which are a set of false and manipulated information that do not correspond to reality, does not require confirmation, the Kyrgyz Foreign Ministry said in a statement.