In social networks, several accounts with the names of Kyrgyz people are actively

publish posts accusing the Kyrgyz side of the border conflict. Some of the fakes are covered by the names of famous politicians.

The editors of Bulak.kg checked these accounts and found out that they are run by Tajiks.

A user named Tynchtykbek Namazbekov published a post stating that the clashes allegedly occurred through the fault of Kyrgyzstan.

Let’s just say this is fake.

We also note that it is not typical for Kyrgyz people to write “Kyrgyzstan”, as indicated in the fake profile post. And in social networks and telegram channels of the Tajik segment, on the contrary, you can often see this word.

The posts of the fake user are also actively shared by Tajik users of social networks.

Social media users also noticed a name of the Kyrgyz ex-official Saatbek Egemberdiev on Facebook. The creator of the fake made a mistake when writing the surname and instead of “Egemberdiev”, he indicated “Egamberdiev” and used the photo of another ex-official Bekjan Jalilov. Fake account also blames the Kyrgyz side for starting the conflict.

The aforementioned fake user Tynchtykbek Namazbekov and a certain Kylychbek Nazarbaev wrote exactly the same text on their own behalf in their feed. We will talk about Nazarbayev later.

This text spread across Facebook and Tajik telegram channels.

A user named as Kylychbek Nazarbayev put a joint photo of President Sadyr Japarov and head of the State Committee for National Security Kamchybek Tashiev on September 14, the day the shootout began. But his previous profile pictures were directly linked to Tajikistan.

His last post was about a statement allegedly made by a member of the Parliament Adakhan Madumarov (we will talk about him later). Post in six languages, among which Tajik comes first.

One more clone of another opposition politician, Zhogorku Kenesh deputy Adakhan Madumarov, appeared on Facebook just three months ago, on June 13. On the same day, a fake user uploaded a cover photo showing the head of the State Committee for National Security, Kamchybek Tashiev, flying to Batken region on June 3.

The fake user has 8 friends, 7 of them are Tajiks. 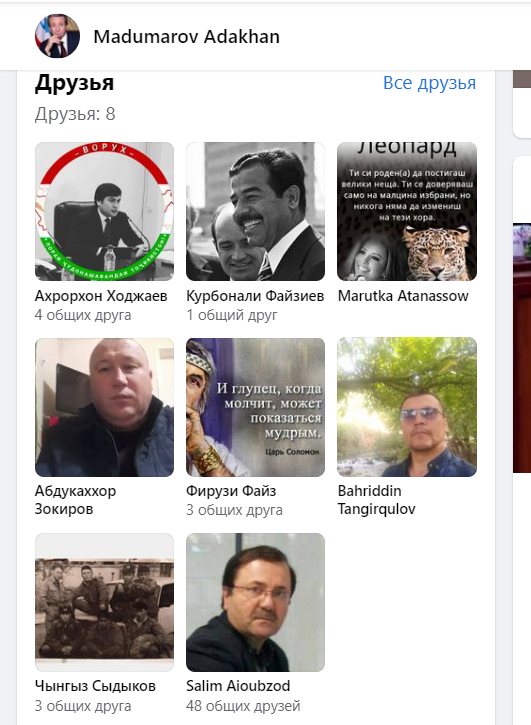 On September 18, a video was posted from this account showing a bloody woman lying on the ground. The user claims that she was the victim of the Bayraktar Drone.

In addition, a text allegedly owned by Madumarov is being actively distributed on the net. It also says that the shooting was started by the Kyrgyz side and the head of the State Committee for National Security is to blame for everything.

The Tajik segment of Facebook, as well as Telegram publics, are actively sharing this text.

And this is the real page of the deputy Adakhan Madumarov, which he has been using since 2015.

On the very first day of the shootout, September 14, a user named Almaz Zhakypbekov appeared on Facebook. His entire tape is aimed at discrediting the head of state and the head of the State Committee for National Security of the Kyrgyz Republic.

Zhakypbekov’s publications are actively shared by users, and all of them are Tajik users.

And one more fact worth paying attention to: on September 17, activists of Kyrgyzstan recorded a video message to the Tajik people.

And today, an appeal by “peaceful Tajik citizen Saidmukarram Tutizod to the Kyrgyz” appeared on the Tajikistan News telegram channel, with the only difference being that the words “Tajiks” were replaced with “Kyrgyz”, and “Rakhmon”, with “Zhaparov”, as well as “tyrant president” to “jailer-president”.

Here is what the anti-plagiarism service issued:

The publics of Tajikistan copied the news, changed only the mention of the Tajik side and distributed it on their channels. But they did not guess whether to change the text, in particular, to change the name of the settlement, or in a hurry they forgot. As a result, absolutely illogical news came out that the Kyrgyz side had allegedly shelled their own village.