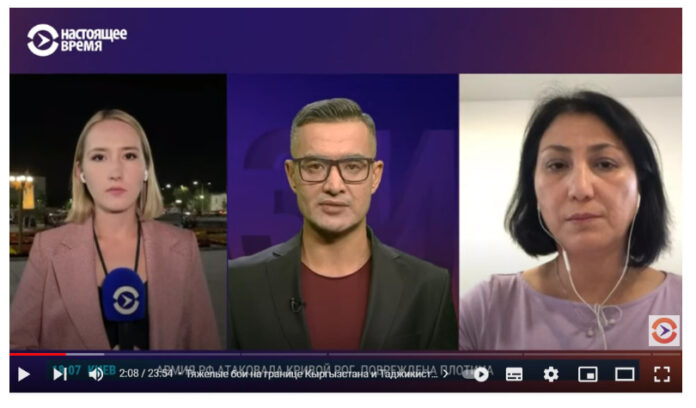 On September 16, the news program «Asia» (Current Time. Asia/“Настоящее Время” in Russian) aired an episode titled «Heavy Battles on the Kyrgyzstan-Tajikistan Border,» during which the anchor gave an overview of recent events that have occurred on the Kyrgyz-Tajik border.

The host of the program interviewed representatives of both countries. The interview by Hiromon Bakozoda, editor of the Tajik service of Radio Free Europe/Radio Liberty in Prague, angered social media users.

Bulak.kg has analyzed her answers and found false information.

The host’s question was: «Is there any information about the deaths from Tajikistan and how do the authorities comment on the conflict?

Hiromon Bakozoda, instead of announcing the death toll, began quoting the statement of the Tajik Border Guard Press Center with reference to the Khovar state news agency:

«The Kyrgyz side, despite the ceasefire agreements reached earlier, started shelling two border areas: (Bobojon) Gafurovsky and Isfara districts.  According to Tajik border guards, Kyrgyzstan’s armed forces have brought all kinds of heavy equipment into the border zone. It is also alleged that Kyrgyzstan is actively using military helicopters and drones to carry out attacks. According to the official authorities, it was the Kyrgyz military that started the current conflict. The border troops of the State Committee on National Security of Tajikistan stated that the Kyrgyz military attacked two settlements in the eastern part of the Isfara region, Lakon and Bogiston. The agency states that the Kyrgyz side ignored all their proposals for negotiations”.

By 10 pm on September 16 it became known that 136 thousand people had already been evacuated from dangerous areas in the Batken region. The numbers speak for themselves — if the Kyrgyz side was prepared for a military conflict, so many civilians would not have had to leave their homes.

It is worth noting that in the official statement of Tajikistan, Kyrgyzstan is accused four times. This type of manipulation is called «repetition.

Repetition as a type of manipulation is the repetition of a particular symbol, slogan or text to make it best remembered by the audience.

Next, the editor of the Tajik service of Radio Free Europe/Radio Liberty in Prague referred to a social media user who reported that the Kyrgyz side was allegedly not ceasing fire, violating earlier agreements.

She also stated during the broadcast that «the Kyrgyz side was actively using drones purchased last year from Turkey. However, she did not provide a single fact, photo or video to prove this. Instead, she referred to the residents of the Vorukh enclave.

Conclusion: not true. The information that Kyrgyzstan used helicopters and drones does not correspond to reality. The video, which is being circulated on social networks as evidence, was taken at the time of the explosion of the gas tanker on September 6, 2020.

Only at the end of his speech does the editor say that there is yet no information about casualties from the Tajik side. At the same time, referring to Reuters reported that a local resident was killed, and referring to Asia-Plus reported about the killed border guard.

It should be noted that according to the Kyrgyz Ministry of Health, 121 Kyrgyz citizens were wounded and 24 died.

It should also be noted that earlier the former director of Radio Ozodi, Sojida Mirzo (Sojida Jakhfarova), was fired after an investigation confirmed that under her leadership the publication had turned into a mouthpiece of the Tajik government.

She was in charge of the media since 2008. It was reported that Mirzo struck a deal with the government in the spring of 2018, promising to soften her stance and refuse to cover uncomfortable topics in exchange for unblocking the website. After an investigation, it was noted that Radio Ozodi’s website was not fulfilling its mission of providing readers with objective information and promoting universal values, including democracy and human rights.

Radio Ozodi is funded by the U.S. Congress and has an annual budget of about $1.6 million.

The verdict: not true.  Hiromon Bakozoda, editor of the Tajik service of Radio Free Europe/Radio Liberty in Prague, voiced false information, citing a state-owned publication that published a statement from the Tajik Border Guard Press Center.